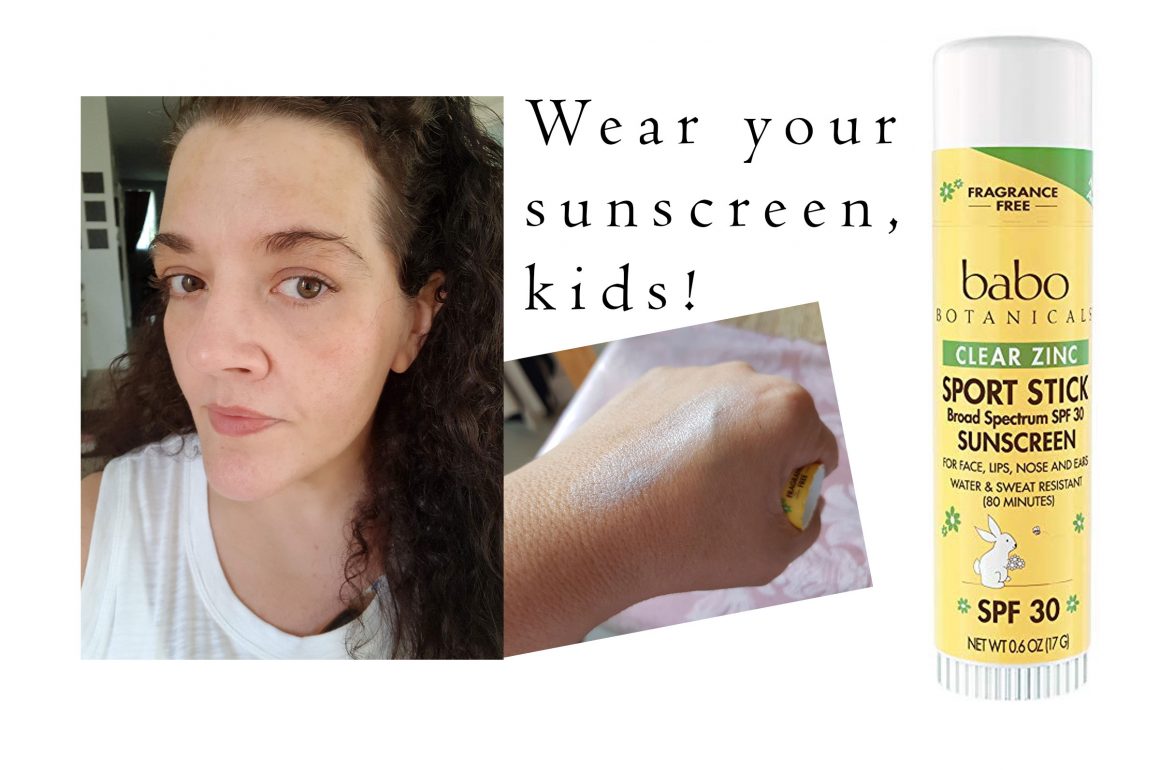 I am always on the hunt for a holy-grail status sunscreen. Even though my personal natural preference is for pale, smooth skin rather than a bronzy tan, my skin absorbs sun rays (and consequently sun damage) with an unholy glee. I can just go *near* a window and I feel my skin begin to tingle.

The Backstory on my Sunscreen History

When I was a child we had a backyard pool and went to a lot of water parks, and the thought of putting on sunscreen was just repellent (but Moooooommmmmm…) so there were many times that I had peeling burns, and most summers I spent tanned nut-brown. 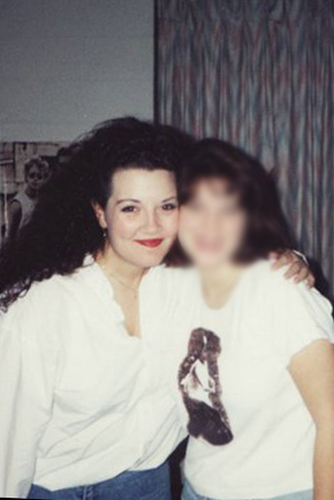 Me in my natural pale state in college.

As I got older (and my goth sensibilities began to emerge) I stayed out of the sun more, because I spent most of my time in a photo darkroom or club, and I valued looking wan. I still wasn’t worried about sunscreen really, I don’t know that anyone really was in the 90s. I don’t remember it being such a big deal back then, but that may just have been the hubris of youth, not the times.

Then when I was in college, I bought myself a convertible. Even though I wasn’t much on sunbathing (and aside from one odd semester and a bad-influence roommate) I stayed _far_ away from tanning beds, it never really occurred to me how much damage I was doing my skin in that car (I was way more worried about what it would do to my hair TBH.) I remember one drive from St. Louis to Minneapolis, entirely made with the top down because it *felt* cool. I had a sleeveless shirt on, and when I got to Minnesota for the wedding I was attending, my shoulders were so burnt I could no longer raise and lower my arms. Goodness knows how much damage my face took then.

After college I moved overseas. The first summer I spent in Holland was absolutely delightful, weather-wise, and since I wasn’t working yet where did I spend all my time? On the beach, or cycling there and back. Cue extra nut browny-ness and even more damage. 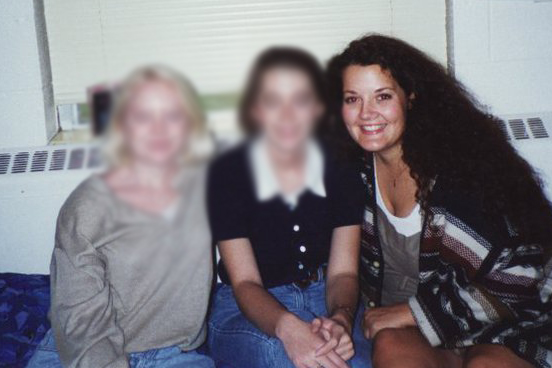 Me six months later, after a summer spent on the beach in the Netherlands. I didn’t even realize that was happening.

But I was radiant! I was in my 20s! Who cared about tiresome things like skin care and sun protection?

Two years ago I looked in the mirror to see a smudge of dirt on my forehead. But when I went to wipe it off it wasn’t dirt, it was some kind of brown stain? Wait… oh it was a giant brown patch of oddly pigmented skin caused by sun damage. That’s when the real fear of the gods hit me. I started wearing hats, avoiding the sun like it was a plague of locusts, and slathering myself in SPF on the daily.

The Quandary about Sunscreen Usage

I really HATE facial SPF. It’s the worst. I am so naturally sweaty, and I have very sensitive eyes, so most sunscreens I tried had me crying in pain after 15 minutes outside. I would sweat, the sweat would stream down my forehead and collect the SPF, then run into my eyes. I was constantly streaming tears and all I ever wanted to do was go back inside. I contemplated wearing sweatbands, that’s how bad it was. (My Olivia Newton John vibe is not strong enough to bring them back though. I can’t attempt it.)

I experimented with expensive SPF and cheap SPF, they were all the same. I tried supposedly waterproof sport versions and spray-on versions and Japanese versions (surely they had it figured out?) and none of them worked for me. I bought sample packs from Sephora, and I even tried a Supergoop Oil version (it smells nice!) but they were all the same. All of them ran into my eyes when I began to sweat and made them sting. I remember one road trip back from Nashville where I  had to pull over and pour bottled water in my eyes, the stinging was so bad that I couldn’t see to drive anymore.

That was bad enough when I was on my personal time, but as someone who occasionally has to do location photo shoots for clients where I am outdoors, it’s untenable. You can’t focus and shoot a camera when your eyes are inflamed and streaming.

The solution was to become some kind of inverse hothouse flower, completely unable to even go outside at all for fear of damaging either my skin or my eyes. And that’s no way to live. I mean, you want to be responsible to your skin and yourself, but not at the expense of never partaking in any activity at all. Then this summer I adopted two new puppies, who I wanted to take on daily park walks, so my hunt intensified. I was reading a listicle (10 Products Makeup Artists Swear By!) and found a reference to this stuff. Babo Botanicals Clear Zinc Sport Stick Sunscreen – SPF 30. I was skeptical, because why wouldn’t I be? The makeup artists were saying that they could layer it under makeup (scoff) and they praised its convenient stick form. The nice thing was its price at <$10 so I thought I would order it and give it a go.

The Verdict on Babo Stick Sunscreen

Here are the official product claims:

The price (right now $6.99 as an Amazon add-on item) is unbeatable. It’s convenient to apply, it’s got a basic twist-up stick applicator and you rub it directly on your face (or whatever body part you’re wanting to protect, I am not judging.) The consistency is comparable to a stick foundation, but a *little* bit more buttery – it’s almost like a cocoa butter feel. I only wear it on my morning walks when I am makeup free, and in the summer I would not try it under makeup, it’s too creamy for that (IMO, YMMV). The most important thing is that it does not budge once it’s on. It doesn’t run, I can sweat and it stays in place. That is holy grail status for me, for sure. That’s the one thing I just have to have.

The cons are few, but one is the smell. I bought the fragrance-free version, but it’s not free of any scent, it smells like… I don’t know. Not nice. Not exactly a chemical smell, it’s more like a raw ingredient smell. Like you stuck your nose in the bottle of canola oil from your pantry. It’s not unpleasant, per se, but you don’t want to smell it all day. 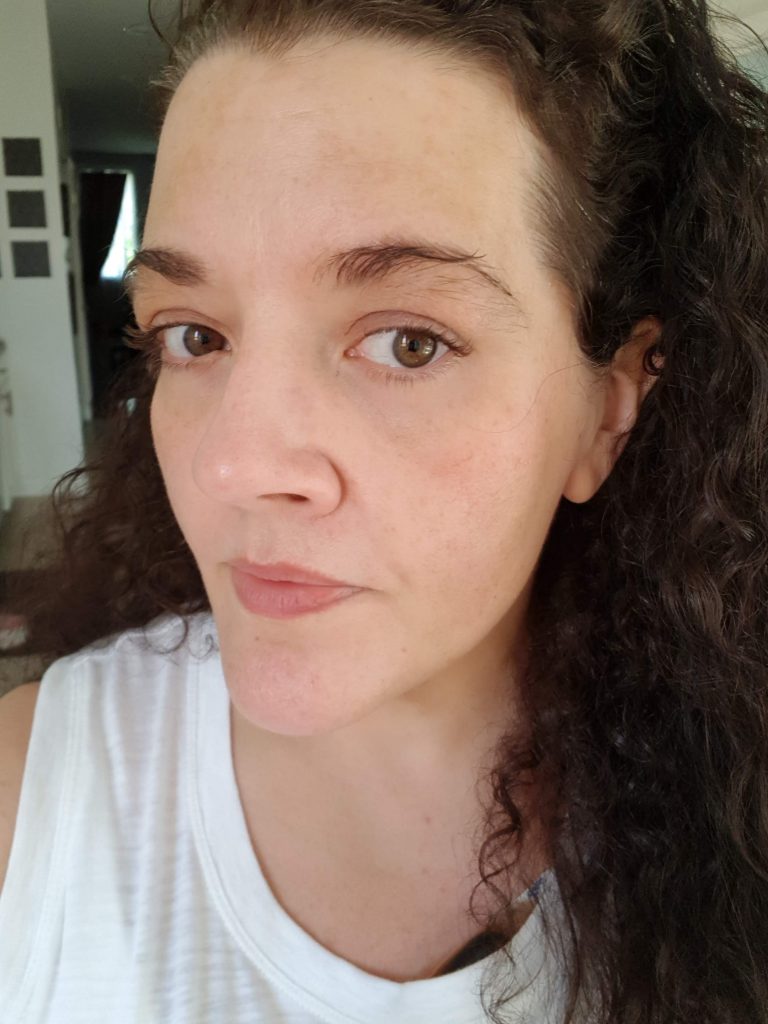 Here’s my naked skin this summer. You can clearly see the sun damage across my forehead – I was hoping that would improve with religious sunscreen use, but all it’s done is not worsened. This goes away over the winter, but the first kiss of summer sun brings it right back.

The other con is the actual SPF factor. This is a 30 and I worry that’s not enough to really prevent more damage. Granted, I have been out every day walking for 45 minutes to an hour, but that’s in the morning when the sun should not be too terribly bad. I don’t think my sun damage has gotten worse, but it’s definitely not any better than last year. So is this a case where not getting worse is an improvement? Is it unrealistic to hope for goth-pale skin when I am out in the sun that much, especially when I use so many retinols and acids that make my skin even more susceptible to sun damage? I am not sure. But I would love it if it had even more SPF. Like, a million.

But basically this is HG status, on my permanent Subscribe and Save Amazon list, and a must-have in my daily routine. If you’re sweaty and sensitive like me (wow, that should be the headline of a dating profile somewhere ) then you may want to give this a try. 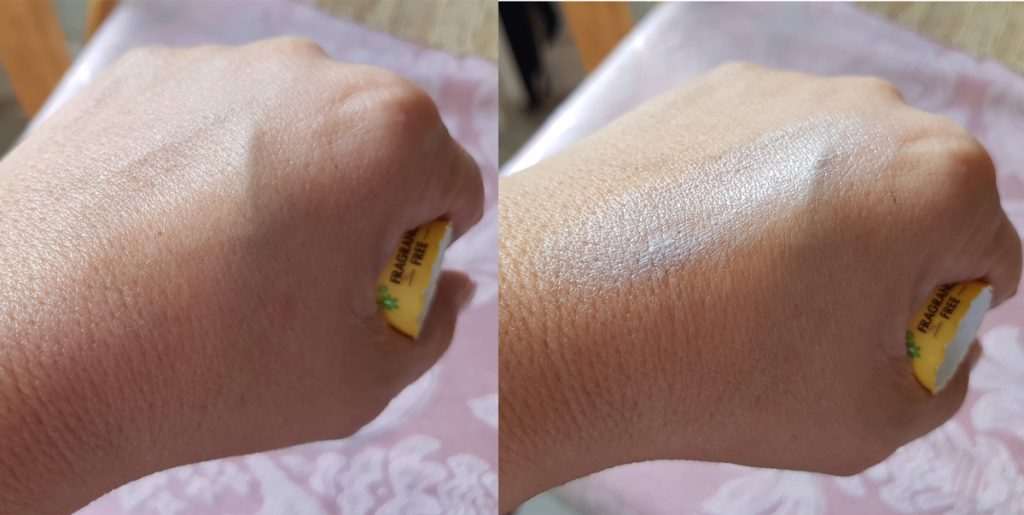 Just after applying (right) and after rubbing in (left)

Let me know if you have any questions about it, and I will do my best to answer them! 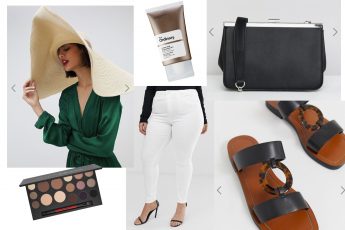 Five Things I Learned from My January No-Buy 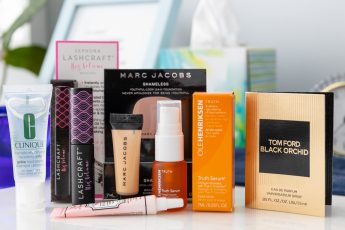 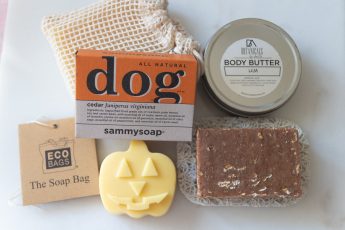 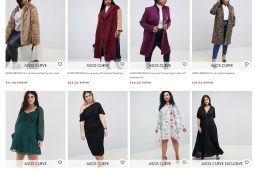 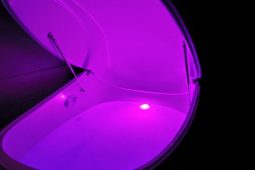 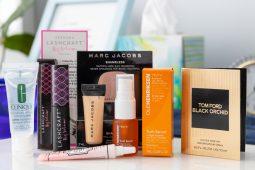 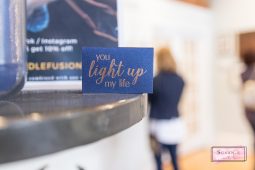